Me, my niece and her brother in happier times, during the summer of 2012.

I’m trying to cope with my niece’s bout with encephalitis. She is a wonderful six year old girl, and while she is alive and well, she has been altered in a way that makes her somewhat unrecognizable to me. Not completely- she is still playful and has kept her sense of humor, but there are unmistakeable changes. Physically, she shakes a lot, has lost almost all ability to speak, and struggles with basic tasks.

The whole thing happened in April, 2015, a mere three weeks before her sixth birthday.  The way my sister made it sound, she might not even make it.  Luckily she did, but when I saw her a few days later, she was in very bad shape.  She could barely move, and looked emaciated.  I spend nearly two weeks just trying to cheer her up, making her laugh by chasing balloons down and playing the same three chords on an acoustic guitar.  Whatever it takes. 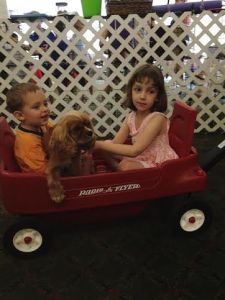 Ilana and her brother Evan, celebrating life in July 2015.

There is not all bad news.  Far from it.  She’s sort of able to walk again, she can sort of say a few words that are occasionally identifiable, provided there’s some context, and she doesn’t appear to feel sorry for herself.  I know things will never be the same, but I hope that we can find the help for Ilana that she needs, so she can live a happy and healthy life.