(Disclaimer- I am not an objective observer here.  I am an emotionally invested uncle with no medical background whatsoever, so take this update for what it’s worth.) 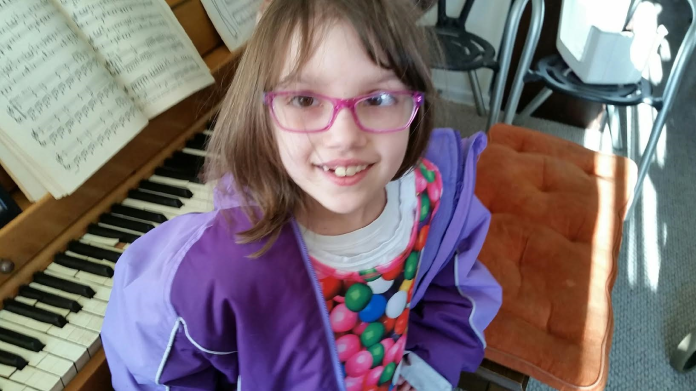 Roughly 6 weeks away from the 2 year marker of when Ilana first got sick, we now have a pretty good idea of the illness’s long term effects on her.  At the risk of tempting fate, it appears that the glass is AT LEAST half full.  Anyone who last saw Ilana a week or so before she got sick, and had no knowledge of what happened to her afterwards, would probably be somewhat horrified to see what has happened to her.  However, anyone who last saw her a week after, and had no knowledge of anything since, would likely be relieved, maybe even a bit thrilled, to see how much progress she’s made.  While she’ll likely never be able to have a “normal” conversation- she processes things slowly, and speaks even more slowly- she can nevertheless speak relatively clearly, and in complete sentences.  (She couldn’t speak AT ALL for several months.)  In a similar vein, she walks a little bit crooked and moves in a disjointed manner, vaguely reminiscent of Johnny Depp’s Captain Jack Sparrow.  But this is still light years ahead of the girl who struggled to move from one side of the BED to the other for nearly a month, then spent months more not being able to take a step without an adult nearby to catch her, like someone putting on ice-skates for the first time.  It’s impossible to exaggerate how much of that is due to Ilana herself, a girl who literally doesn’t know how to quit- and yes, the word “literally” is being used here the way it was meant to be.  The only thing that stops Ilana from working at ANYTHING she is determined to accomplish, is if someone stops her by force.  How someone who’s had so much cruelly taken away from her, let alone at such a young age, can be so determined escapes me, but I’m very grateful for it.

Her relationship with her younger brother, Evan, has also been altered pretty dramatically.  Before she got sick, Ilana was like any older sister to their younger brother- fiercely protective, yet completely intolerant of any nonsense, real or perceived.  But once Ilana’s abilities became compromised, Evan reacted strongly to the situation, sometimes even violently.  He was about as caring a toddler as anyone can imagine…but he was still a toddler.  He was old enough to see something had gone wrong with Ilana, yet not old enough to understand WHAT had gone wrong with Ilana.  Sometimes, it seemed like he would just do things to get her to “snap out of it,” like throw dolls at her head.  Thankfully, he’s outgrown this- or maybe just been yelled at enough to know he can’t do it anymore- but also capitalizes on the fact that Ilana can’t stop him, whenever he wants his way.  Given that he was 3 and a half at the time she got sick, and is now 5 and a half, he probably has virtually no memory of a time when it was any other way.  So, it’s up to the adults in his life to continue to explain to him, as compassionately as possible, that HE needs to act like the older sibling.  He loves Ilana very much, and looks out for her in a way well beyond his years, so this should be an increasingly easier concept for him to latch onto.

On a personal note, I get a sort of twisted comfort out of the fact that not every struggle Ilana faces is a result of her illness.  Even when healthy, her coordination was kind of a mess, and she often looked lost during athletic activities.  This was a concern at the time, but something about the fact that this is who she’s always been, versus the idea that it was something taken away from her, is somewhat reassuring, ironically.  Unfortunately, the same can’t really be said about her mind, as she used to be a razor sharp thinker.  Now, she has trouble adding numbers larger than one digit long.  But it doesn’t stop her from persisting, and often succeeding.  Thank goodness the sickness didn’t take THAT away from her.

Most of important of all is that her personality, particularly her spirit, were least affected by her illness.  In addition to being determined, she has an unparalleled imagination, and a bright, optimistic outlook that she would have every right to lose, given all that has happened to her.  Thankfully, she hasn’t.

As for what lies ahead?  Again, it’s tough to say ANYTHING, at the risk of tempting fate.  But the future seems clearer, and dare I say, a little brighter, than it did the last time this site was updated.  Ilana has a lot of people who love her and care about her, and as long as she can stay healthy from this point forward, we can continue to be hopeful for her future, and proud of all that she’s already achieved in her young and challenging life.

Standard
Well prior to seeing Ilana this past week, it had been nearly 6 months since I last saw her.  The length of time that had passed gave me some perspective on whether she’d made significant progress, and it seems that she has.  It’s not linear- she often gets tired easily- but given the circumstances, it’s about as good as we could have hoped for, perhaps even a little bit better.  Her movements are shaky, her speech is very slow and choppy, and her ability to interact with the world remains compromised.  However, considering that we didn’t know if she’d ever walk or talk again when this nightmare unfolded- or even make it out of the HOSPITAL, for that matter- I’m sort of thankful she’s even gotten THIS far so far.  While I’ll never be complacent about any of this, I think we’ve seen more overall good than bad, since the initial illness subsided.
One positive from all this is that, incredibly, her spirits haven’t been dampened.  Part of it is that she has a ton of love and support, but a lot of it comes from who Ilana is at her core, even (especially?) after the cruel damage that’s been done to her.  In a recent school assignment, she had to give a list of things she wished for.  This is what she came up with-
“I wish I could eat fruit snacks.
I wish I had a pink car.
I wish I could have a dog.
I wish I turned seven.
I wish I could be a doctor when I grow up.”

I think it says a lot about a girl whose first wish is to eat fruit snacks- especially a girl in HER generation!  It’s nice that she can find such joy and humor in the simplest things.  We went to an “Imagination Museum” in New Jersey last Saturday, and she enjoyed herself about as much as she could have at Disneyland- for about 5% the price, no less!  And speaking of price, while she will likely never be able to be a doctor, she certainly isn’t shy about playing one- when I banged my leg against the couch, she got her kit out and took a look at my bruise, then charged me $100 for the appointment.  (She laughed hysterically, thinking it was a ridiculous price to charge.  Wait until she sees what medical costs really are.)  Not to be outdone, my nephew asked for a checkup.  Ilana obliged, then charged him a mere $7, just to spite me.  As I’ve said since the beginning of this saga, the part of her brain designed to antagonize me has remained unaffected.

Anyway, all we can do is hope for her to keep pushing forward, and perhaps we’ll get lucky along the way, and find some kind of specialist that can help give us some insight on how we can make this happen.  But even independent of that, I already think she’s the most resilient, big-hearted person I’ve ever known.  MY biggest wish is that she’ll be able to grow up, and eventually even grow old, so that the rest of the world can reach the same conclusion.
Standard

Me, my niece and her brother in happier times, during the summer of 2012.

I’m trying to cope with my niece’s bout with encephalitis. She is a wonderful six year old girl, and while she is alive and well, she has been altered in a way that makes her somewhat unrecognizable to me. Not completely- she is still playful and has kept her sense of humor, but there are unmistakeable changes. Physically, she shakes a lot, has lost almost all ability to speak, and struggles with basic tasks.

The whole thing happened in April, 2015, a mere three weeks before her sixth birthday.  The way my sister made it sound, she might not even make it.  Luckily she did, but when I saw her a few days later, she was in very bad shape.  She could barely move, and looked emaciated.  I spend nearly two weeks just trying to cheer her up, making her laugh by chasing balloons down and playing the same three chords on an acoustic guitar.  Whatever it takes.

Ilana and her brother Evan, celebrating life in July 2015.

There is not all bad news.  Far from it.  She’s sort of able to walk again, she can sort of say a few words that are occasionally identifiable, provided there’s some context, and she doesn’t appear to feel sorry for herself.  I know things will never be the same, but I hope that we can find the help for Ilana that she needs, so she can live a happy and healthy life.